Cauliflowers are enjoying the spotlight this year, it seems - cauliflower 'rice', salads, baked whole cauliflower, soups, purees/sauces - recipes using it are popping up everywhere, which is great.  This cheap and nutritious winter staple has for too long been under-rated and mostly rather unimaginatively served boiled or steamed. In fact it's very versatile and can be prepared in dozens of way as well as teamed with a very wide range of flavours.
Caramel chilli roasted cauliflower is delicious - when I first made it, I couldn't resist dipping back into the dish despite having already eaten more than i should have - definitely a case of greed, not need! 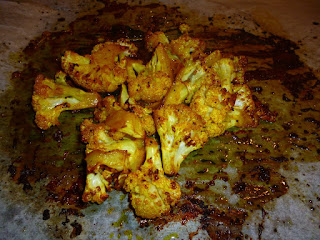 This combo is addictive, and so good you’ll need more than you think.
Serves 4

Heat oven to 190 C . Line a large shallow baking tray with a lip with baking paper.
Cut the cauliflower into bite sized pieces and toss in the oil. Transfer to the lined baking sheet.
Combine the remaining ingredients and pour over the cauliflower.
Roast at 190 C for about 30 minutes or until cooked through and caramelised, tossing regularly.

Posted by Rowan Bishop at 16:13 No comments:

The thing about persimmons

The thing about persimmons is that they're not only beautiful to look at, but delicious in so many ways. The tree itself is really attractive, too, especially in Autumn. Just before the leaves fall, they turn  russet, chocolate, red, orange and yellow - very showy, whilst the fruit quite quickly turns a lovely tangerine shade.
I usually pick mine once the birds start eating them, even if they're not quite ripe; they know exactly when to target the tree, and I was even scolded the other day by a wax-eye because I deprived him of his feast.
I've baked them in cakes, but I prefer roasting them, peeled and sliced, with some pomegranate molasses . A quick dessert and simply served with creme fraich or a bespoke ice cream.

Last year, though, I thought I'd try something different, and came up with Persimmon 'Marmalade', which is truly delicious. It also contains oranges and limes, but persimmons add complexity to the flavour and of course give a different texture. This year I've made a double lot (which is quite a big quantity), but about half way through I had to put a lid on it and leave it overnight because i'd run out of time to jar it up. I completed the process the next morning, and I think if anything it was even better than the previous year's effort! 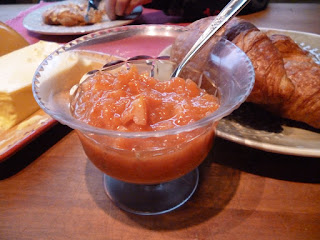 Not sweet, not sour, this ‘marmalade’ is not a traditional marmalade, but does have a lovely citrus flavour. Delicious with a hot  crusty croissant (or toast, pancake or scone).

Wash all the fruit but don’t peel.
Slice the oranges and limes or lemons thinly then into small (4mm) pieces. It’s important only that the skins of the citrus are not too chunky.
Chop the persimmons roughly then pulse in a processor until chopped but not pureed – it should look coarsely grated.
Place all ingredients in a large heavy bottomed pot and bring to simmer point over a medium-high heat.


Simmer for 1 ½ - 2 hours or until the mixture is reduced by about half  and has thickened to a jam-like consistency.

I really have been neglectful of this blog for some time now, not because of just plain laziness, but well. . other stuff. Two blogs in a day seems a bit over the top in the light of that confession, but plums will be finished soon, so I do have to post this. .
In any case, even though my garden and cooking/recipe development have also been neglected for a while, I simply can't resist the opportunity to cook up some preserves - especially when offered some Black Doris plums from cousin Sue's tree!
They were excess to requirements for her, but I was thinking plum paste: jam: chutney: bottled fruit; and sauce. In the end I only got to the sauce, but I did have a flash of inspiration while I was thinking about it, and am really pleased with the flavour - simple to make, and the mint does add zing.
Black Doris plums make wonderful preserves, but other red-fleshed plums such as Omega and Satsuma are also very good (as well as delicious eaten fresh). 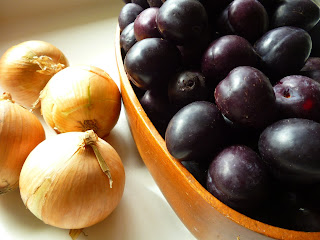 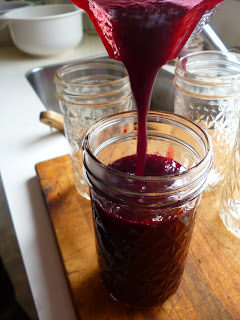 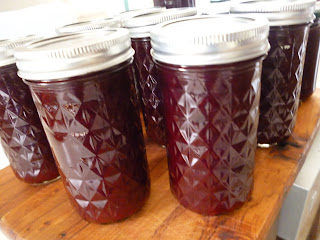 Black Doris plums are superb in this recipe, but any red-fleshed plum will work; they can be frozen if you don’t have time to make the sauce at the time of picking.  Infused with mint, sumac and chilli, this sauce is one you’ll wish you’d made more of.
There is no need to cut and stone the plums before cooking, just cook whole and squish them as they soften, as the mixture is sieved before bottling.
Commercially prepared ginger and garlic saves a lot of time and makes no discernable difference to the flavour.
Makes 9 -10 x 400g jars

Place all the ingredients in a jam pan or very large pot, bring to simmer point and cook, stirring occasionally, for 30-40 minutes, until the plums are very soft and breaking up. Squish some with a wooden spoon to distribute the flavor into the flesh during this cooking time.
Pour the mixture through a colander into a large bowl to catch the juice. Then press the solids (discard the cinnamon sticks) in the colander through a sieve and add to the juice. This will have to be done in several lots. Discard the pips and other solids left in the sieve.
Transfer the plum juice and puree into a large pot and simmer slowly for about 15 minutes, or until the sauce is lightly thickened – it will thicken a little more as it cools.
Pour into hot, sterilized jars or bottles and screw on hot, sterilized lids/corks.


*The commercial bottled kind works fine.
Posted by Rowan Bishop at 13:46 No comments:

Eggplants: Queen of Vegetables (or Fruits if you're a botanist)

Autumn is one of my most favourite times of year; not just for the settled, balmy weather but for all the autumn produce available. I grieve for my own garden, but I've had someone looking after it while we've been here in Wanaka for the summer, even though it's been largely just keeping the weeds under control. It's been nice to be away from the humidity of the North Island, in any case - here it's hot and dry most of the time, and at least I'll have self-sown herbs and a crop of tomatillos to go back to - maybe some figs too, as they're a late cropping variety.
Eggplants are so good at the moment - plentiful and cheap, and so versatile. In any case, eggplants have been great this summer and are still plentiful - this recipe isn't new, I first published it in a column in 2010, and again in my 'Vegetarian Kitchen" in 2011, but I keep going back to it as a simple but delicious side to a main dish, or even served as an entree. Easy! 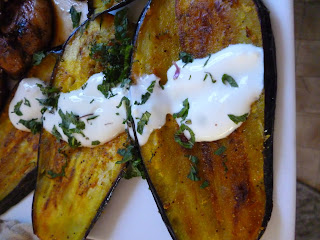 Serve hot or at room temperature.
Serves 4-6. Not suitable to freeze.

Slice the unpeeled eggplant into 1-1.5 cm(1/2 inch) rounds and salt lightly on both sides with the first measure of salt. Place in a colander to drain for 30minutes.
Pat dry with paper towels.
Combine the flour, coriander, turmeric, 2nd measure of salt and the pepper in a small dish.
Dredge the eggplant slices in the flour mixture and shake off any excess.
Heat enough oil to shallow fry the eggplant – you may have to add more during the cooking time. Fry until golden brown and crisp on both sides. Drain on paper towels before transferring to a serving dish (either warm or at room temperature)with the yoghurt/mint dressing.

Posted by Rowan Bishop at 13:16 No comments:

What's in a name? Green Soup or Zuppe Verdi? Really, I felt the latter was a bit pretentious, especially as this soup isn't traditionally Italian - so plain old Green Soup it is, even though I have to say that the name doesn't reflect at all how good this soup is. .

Green soup packs a punch, nutritionally speaking, but it’s also delicious, elegant and super simple to prepare.
A hint of chilli and lemon zest lifts the flavour; and the small amount of cream cheese and the avocado bring it all together.
Freezes well.
Serves 6

Heat the oil in a large, heavy based saucepan over a low-medium heat. Sauté the onion until softened, then stir in the chilli and garlic and sauté a few minutes more.
Turn the heat to medium high, pour in the stock and the peas, salt and pepper and bring to simmer point. Stir in the spinach and simmer three-four minutes.
Transfer to a processor with the avocado, pesto or basil, cream cheese and zest. Puree very thoroughly to ensure the cream cheese is well blended into the mix. This may have to be done in two steps.
Return the pureed soup to the original saucepan and reheat to serve in warm bowls accompanied by hot crusty ciabatta or quesadilla .


Garnish with lemon zest ‘threads’, a leaf tip of basil and some finely sliced red chilli.
Posted by Rowan Bishop at 17:15 No comments:

Rowan Bishop
I've been writing about food for 30 years, through four cookbooks, a decade of running a specialty catering business, and hundreds of newpaper and magazine columns (food, travel and general interest). My first cookbook, 'Vegetarian Adventure' (co-authored with friend and restauranteur Sue Carruthers from Rarotonga) was published over twenty years ago, when even the word 'vegetarian' provoked reactions varying from amusement to horror - as opposed to the popularity and acceptance it enjoys today. My 'food philosophy' is that the quality of the food we eat is our best health insurance; that loving what we eat is fundamental to a balanced life; and that learning to cook well is intensely satisfying on a host of complex levels. Eating vegetarian makes sense in terms of good health and sharing the world's resources, as well as promoting a love of great tasting food. 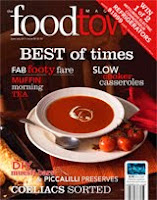